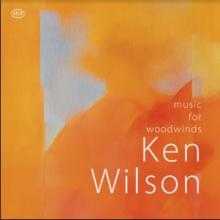 There are nine interesting and pleasing works on this disc's 20 tracks, all showing the great affinity that New Zealand-born composer and clarinetist Ken Wilson (1924-2012) had for writing original wind music.

Wilson played clarinet alongside John McCaw in the RNZAF Band from 1942 and was a founding member of the NZ National Orchestra from 1946 to 1957. Then after several years in the United States, gaining degrees in composition and clarinet at Buffalo (New York) University, he returned to New Zealand to join Auckland's symphony orchestra and was clarinet teacher at the Auckland University. In 1980, he took up a temporary post teaching woodwind in Melbourne, returned to Wellington in 1981 and retired to Auckland in 1998.

A major item is Concerto for Clarinet and String Orchestra (1963), played by soloist Patrick Barry and the NZSO strings, conducted by Hamish McKeich. Wind Quintet (1965) is performed by the Zephyr String Quintet, and Octet (1961) by Stroma, conducted by McKeich. In addition there are six shorter items in which Peter Scholes is a prominent clarinettist, including two effective duos for two clarinets and one for clarinet and bassoon.

Wilson's woodwind wizardry is also well to the fore in two clarinet quartets: Show Piece and Variations on a Theme of Paganini, where a brilliant understanding of woodwind instruments is shown. I had not heard Wilson's music before; his talent as a composer is impressively displayed on this recording.

Verdict: Fine music from the reeds.