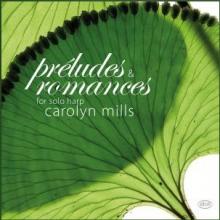 American-born Carolyn Mills has been the principal harpist with the New Zealand Symphony Orchestra since 1989 and has performed in orchestral, solo and chamber music settings in many cities round the world. Her previous discs have been praised. As a passionate ambassador for the instrument, she has collaborated with composers and inspired new works, several of them on the 18 tracks of this CD. This recording shows the diversity and beauty of sounds possible from the harp, played by an expert soloist.

The standout item is Helen Fisher’s Otari, an evocative 16-minute piece written for the performer and inspired by Otari Native Botanic Garden in Wellington. It uses extended techniques to recreate birdsong, insect rustling sounds, and whispers of wind, making a mix of cascading glissandi suggesting the fury of storms and calm meditative movements of beauty. Kenneth Young wrote his Autumn Arabesque for Mills, with a melody weaving in and out of rippling accompaniment until a reflective mood before the sunlight of bright chords and "drifting-away arpeggios".

The other items are mainly by French composers. Best-known is The Girl with the Flaxen Hair, linked with another short piece by Debussy. Marcel Grandjany, noted for colourful harp compositions, is represented by Automne. Prelude No.1 and Prelude No.2 linked together. Bernard Andres provides eight short preludes in just over 14 minutes. Carlos Dsalzedo wrote Siciliana, from the Suite of Eight Dances, modernising an old but melodious style of music. From American composers, Nicolas Flagello’s expressive Berceuse and Kevin Kaska’s Vacances Parisiennes are brief but interesting.