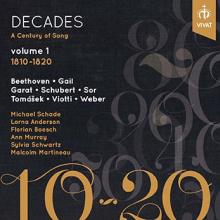 This is the first volume in a planned series celebrating a century of song, each disc looking at works from a particular decade.

It will feature world-renowned singers and potential stars of the future, drawing listeners decade by decade through a century of song from 1810 to 1910.

On this initial CD we have songs by Schubert and Beethoven but also Carl Maria von Weber and Goethe, settings by the Czech composer Vaclav Jan Tomasek, French songs from Joseph Dominique Fabry-Garat, a Spanish song from Ferdinando Sor (better known for his guitar music), and songs by the Italian composer Giovanni Battista Viotti.

The 32 enchanting tracks are a mix of familiar and rare.

They include two celebrations of the moon by different poets that inspired Schubert, and also an unfamiliar lively bolero-styled number by Sophie Gail (1775-1819).

Tenor Michael Schade, from Canada, gets the lion’s share of the songs and is joined by the Scottish Lorna Anderson and Spanish Sylvia Schwartz (both sopranos), Irish mezzo-soprano Ann Murray and Austrian baritone Florian Boesch: a great team of soloists.

Lesser composers will get a chance in the  programme selection.

The series will mix familiar songs with the rare: as well as presenting music by the great Austrian-German composers, the repertoire will venture further afield, and future volumes will add music from middle Europe, Russia and Scandinavia.

Recording quality is up to the usual high standard of King’s Vivat label and a 72-page booklet has authoritative notes, together with full texts and translations.