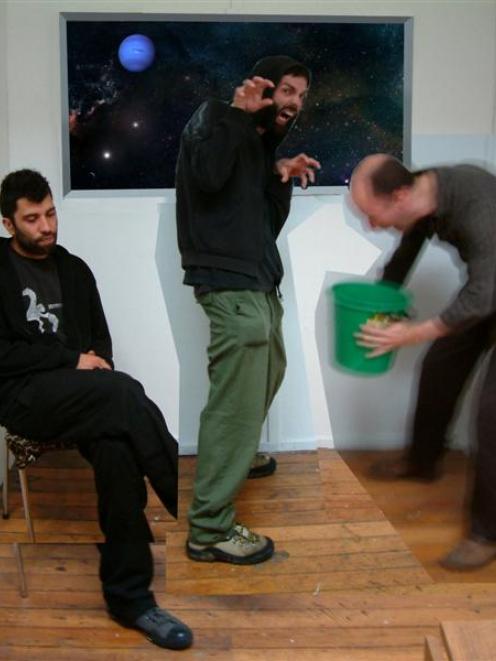 The Plasterers.
Reasonably new band the Plasterers are playing at The Crown Hotel next Friday. The three-piece is a collaboration between John "Jumps" White, Toki Wilson and Ben Smith, and members describe the band's sound as varying between death metal, techno-pop, and a Flying Nun influence.

The band formed in 2009 and there are strong rumours they'll have an album for sale at the gig.

White says the band is a bit of a departure for him.

"This is a deadly serious side project for me, Toki and Ben.We take it very seriously how much of a side project it is."

He rather sardonically describes the album: "We have an album of magically fabricated deathjungle pop songs we have been recording as we go."


• It's gospel
Tear, or The Evangelical Alliance Relief Fund is presenting an Australian gospel musician in Dunedin.

Peter Shurley is to play a free concert on May 7 at 7pm in Andersons Bay Presbyterian Church, 76 Silverton St, Andersons Bay.

Described as one of Australia's most popular gospel artists, multi-award-winning singer-songwriter and instrumentalist, Shurley is touring to support his 16th album, although this will be his first performance in the South Island.

The concerts are free but donations are welcome.


• Rock on
New Zealand rock 'n' roll survivor Tom Sharplin is on the road again on his "Rock around the 50s" tour which begins this week.

Sharplin says he and the band are excited to be joining Operatunity for the tour.

"Our audiences are certain of having a great time with music that will take you back to the fun days of the '50s rock 'n' roll." Organisers invite audience members to dress-up and join the fun in 1950s fashions.


• Music to read by
May is New Zealand Music Month and at Dunedin's libraries there will be plenty to hear.

The City Library, in Moray Pl, will be holding a gig night every Thursday from 5.30pm-7pm, as well as lunch sessions on Fridays from 12.30pm-1.30pm.

Meanwhile, community libraries around the city are also taking part, with performances at Port Chalmers, Mosgiel and Waikouaiti throughout the month ranging from choirs to ukuleles and kapa haka. The action begins with Elise Allen and Dierdre Newall at Port Chalmers on Thursday at 7pm.

She was to have visited the country on May 6 and 7.