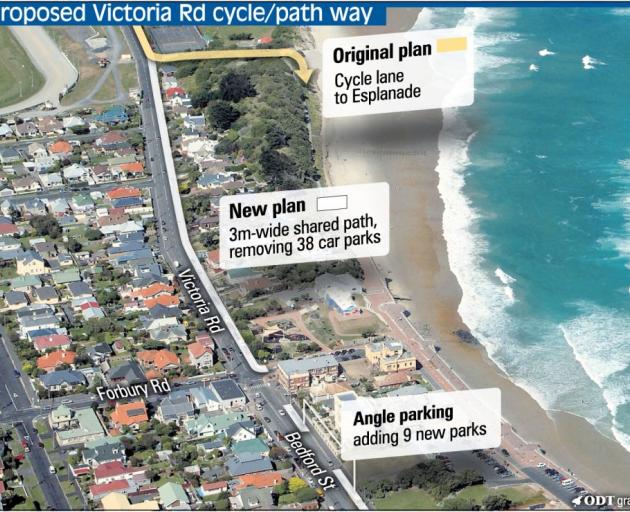 A storm is brewing in Victoria Rd where some residents say the Dunedin City Council's plan to install a shared walk/cycle path is rushed and a potential disaster.

Residents are angry about the way they are being consulted on the proposed changes and say the option they have been offered is unsafe.

But council staff say the process is appropriate and the purpose of the consultation is to see if they need to reconsider the plan.

In the original South Dunedin cycle network plan, which the council consulted on in 2012, the cycle lane to St Clair was to be on a gravel path along the dunes between Victoria Rd and the beach.

However, residents were informed by letter drop last Friday the route had to be changed because of concerns about the structural integrity of the dunes and sand on the path.

Two alternative options were proposed - either turn the sea-side footpath of Victoria Rd at the St Clair end into a 3m-wide shared walk/cycle path to the Esplanade, removing 38 car parks, or do nothing and end the cycle network at Kennedy St.

The flyer noted on-street parking would remain in the second option, but ''the key destination of the St Clair Esplanade would not be connected to the rest of the cycle network''.

Residents had 10 working days to give feedback and had an opportunity to discuss the proposal at a meeting at the St Clair Scout Hall today.

Victoria Rd resident Rene Lammers said he had spoken to several other residents ahead of a neighbourhood meeting he organised last night, and the general response to the proposal had been one of concern.

''The general feeling is most people think it is a ludicrous idea.''

Already many residents had to back out across the footpath, with regular near-misses. Removing car parks, which many residents used, would increase the number of the cross-path movements.

More cyclists on the path would also cause issues for pedestrians, particularly many mothers with young children and buggies.

There was also concern people only had a few days to give feedback by telephone or email, with no option to make formal written submissions, and even less time before their one opportunity to discuss it with staff and designers, at tonight's meeting.

There was also some concern about what seemed to be a lack of transparency about how residents' feedback or concerns would be collected and evaluated, Mr Lammers said.

Nine extra car parks proposed for Bedford St would be inconvenient for residents.

The loss of parks, where it was already nearly impossible to get one at times, would also push residents and visitors even more into the surrounding streets, although it was not clear if those residents had been consulted, he said.

''They are encouraging more businesses there [St Clair], yet taking away parks.

People felt they were being pressured into option one, as choosing option two would lead them to be the bad guys because the network would not extend to the popular Esplanade area.

St Clair Surf Life Saving Club committee member James Coombes said the club was also concerned about the many daily movements its members had to make over the path to enter and exit their clubrooms, sometimes towing trailers.

There had been near-misses with cyclists and they were concerned the proposal would make things worse.

A spokeswoman from Little Wonders child care centre said it did not really affect them as it was on the other side of the road and, if anything, would probably make that side safer for children.

Cr Andrew Whiley said he had been contacted by several Victoria Rd residents and had contacted other councillors and Mayor Dave Cull to suggest the council, before going any further, look at a five to 10-year plan for the development of the St Clair waterfront area and how the cycle lane might fit into that.

The purpose of these consultations was to get people's views, which could persuade staff they needed to do further thinking on the plan.

It had not rushed the plan, he said.

The entire network was set down to be completed by June 30 next year, but it was not ''do-or-die'' that the council had to make its decision on this stage at its June meeting, as signalled in the letter.

Depending on what staff found from the consultation, they might have to go back to councillors with an update informing them more work needed to be done, he said.