Hillside's 'kick in the guts' 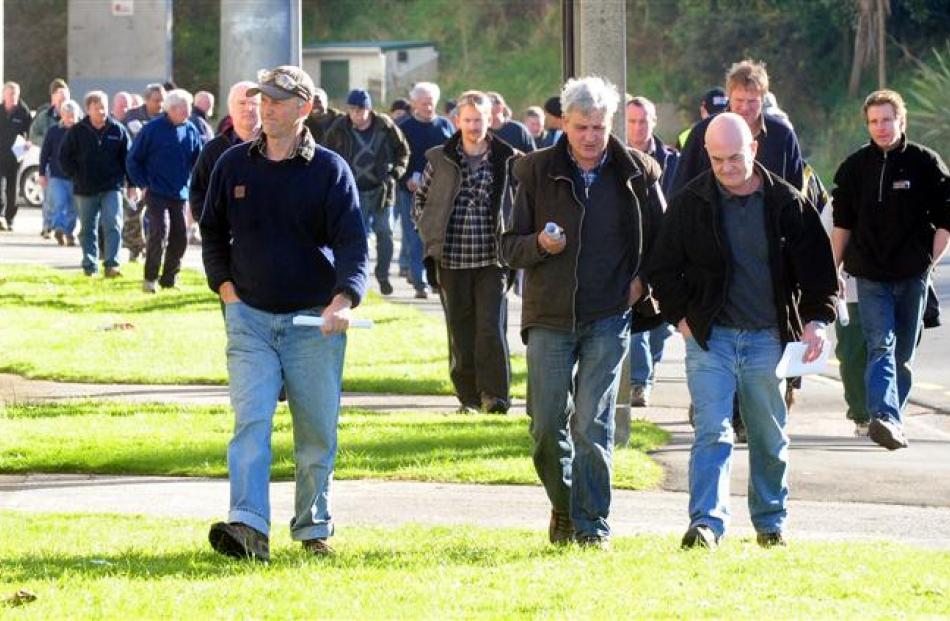 Hillside Engineering employees walked away dismayed after meeting KiwiRail bosses at Carisbrook yesterday, where they were told 40 workers would probably lose their jobs.

KiwiRail proposes to cut up to 70 jobs from its nationwide engineering and design operations, with the South Dunedin outfit the hardest hit - an outcome critics say could have been avoided.

The Rail and Maritime Transport Union blamed the job losses on the Government, and KiwiRail's decision to outsource major rail manufacturing contracts overseas.

Hillside-based RMTU national president Jim Kelly said KiwiRail would not answer questions about what the future held for Hillside.

"My gut feeling is down in my boots. We need to fight to keep these jobs here and stop this sort of thing happening," Mr Kelly said.

KiwiRail chief executive Jim Quinn said it was a commercial decision to buy foreign-built locomotives, wagons and containers, which were critical to improving the business.

The proposed job losses were a "difficult decision" made in light of reduced work schedules at Hillside, he said.

The size of the Hillside workforce had always fluctuated according to the amount of work available, and in recent years the workforce increased to build carriages for Auckland and Wellington services.

"Unfortunately, this work has now been completed and their workload for the remainder of this year is greatly reduced," he said.

The decision to outsource contracts was about ensuring KiwiRail was sustainable in the long term without seeking more money from the Government, Mr Quinn said.

He would not "categorically" rule out more job losses at Hillside "because these decisions are made on a commercial basis and I can't forecast what [economic conditions] will be like in the future".

The job losses were a direct consequence of KiwiRail not bidding for a $500 million rail construction job for the electrification of the Auckland rail network, and last December's decision to send contracts for 500 new container flat-top wagons offshore had not helped, he said.

"I just don't understand the process which could end up with such a decision. We've got hundreds of millions of dollars to spend in rail and we're spending it all in China."

The full extent of the job cuts had been a "gut-wrenching" surprise to union delegates, Mr Butson said.

"We're talking about 70 high-skilled and scarce jobs, which the rail industry can't afford to lose."

Dunedin South MP Clare Curran said the redundancies heralded a "death knell" for Hillside and proved the Government was interested only in "efficiencies and cost savings", not in jobs or the economy.

Minister of Transport Steven Joyce said the Government was not there to direct KiwiRail on commercial decisions.

"The reality is KiwiRail has been treated like Cinderella for too long. This Government will not place requirements on KiwiRail which we don't on any other government or private-owned company."

Robert Trompetter, a Hillside employee for the past 35 years, said the job cuts amounted to 25% of its workforce.

"We have been told rail would be brought back to the forefront of the transport industry and instead they cut all our jobs. We're gutted."

Hillside adult apprentice Steve Alexander said, with only two years' employment under his belt, he expected to be cut from the company.

"I could be one of the workers they cut. I got laid off from my previous [engineering] job and it's happening again," he said.

"I've been through redundancy with the railways during the '80s. This is history repeating itself."

The decision to cut Hillside's workforce to 132 employees brings the tally near the engineering outfit's historic low of 113 workers during the early 1990s.

"This is a decision based purely on economics and the economy is cyclical. We need to remain positive and optimistic that these jobs will come back - as they have before," he said.