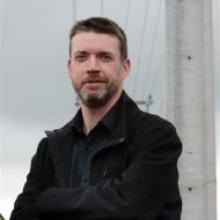 Prof Liam McIlvanney at Ayreshire Dr in Mosgiel yesterday. Photo by Gerard O'Brien.
A battle to stop alleged cultural insensitivity in Mosgiel is boiling over as another Scottish place name is spelt incorrectly in an administrative blunder.

Prof Liam McIlvanney, the Stuart Chair in Scottish Studies at the University of Otago, said he cannot live with the spelling mistake in Ayreshire Dr, a street in the new Mosgiel subdivision, Highland Park.

"This comes down to a basic question of cultural respect. If we are serious about respecting and valuing the various cultures that contribute to contemporary New Zealand, then we need to get these things right.''

Ayrshire is the Scottish home territory both of poet Robert Burns and of Prof McIlvanney.

The street name was chosen to honour Otago's Scottish pioneers but defeated the purpose by getting the name wrong.

"Ayreshire Dr will stand, not as a tribute to our Scottish forbears but as a permanent reminder of the ignorance and carelessness of their descendants.''

Prof McIlvanney wanted the error corrected before it was included in maps and street directories.

The developer of the Scottish-themed subdivision, Cranbrook Properties managing director Sydney Brown, said the street name was initially spelt correctly, Ayrshire, but a spelling error was made by a staff member on registering the name.

"We didn't pick it up and now it has gone through Land Information New Zealand and the Dunedin City Council.''

He would try to resolve the issue but it could be too late and Prof McIlvanney might have to learn to live with the mistake, he said.

The mistake was not culturally disrespectful, he said.

"There was nothing done with malice; it was a simple mistake in the translation ... if he thinks that's disrespectful, he must be pretty thin-skinned.''

Prof McIlvanney was "inconsiderate and unreasonable'' as the mistake had been acknowledged, Mr Brown said.

Prof McIlvanney said the mistake was compounded because the spelling of Mosgiel was wrong - it should be Mossgiel.

In W. R. Kirk's book Pulse of the Plain: a history of Mosgiel, published by the Mosgiel Borough Council in 1985, details how the Mosgiel name derived from the Mossgiel farm near the town of Mauchline in Ayrshire, Scotland.

On the farm, the Rev Thomas Burns was born in 1796 and Robert Burns wrote many of his best-known poems and songs there.

Mr Kirk said evidence suggested Dunedin's Mosgiel lost an "s'' when Arthur Burns, son of the Rev Thomas Burns, began writing only one s in Mosgiel after he took over the family's Taieri land in the 1850s.

"The main problem here is not the error itself - after all, everyone makes mistakes. The real problem would be the failure to rectify the error.

"If Cranbrook Properties and Dunedin City Council have the necessary will to respect the memory of our Scottish pioneers and get this right, then I have no doubt that the street name can be corrected.''