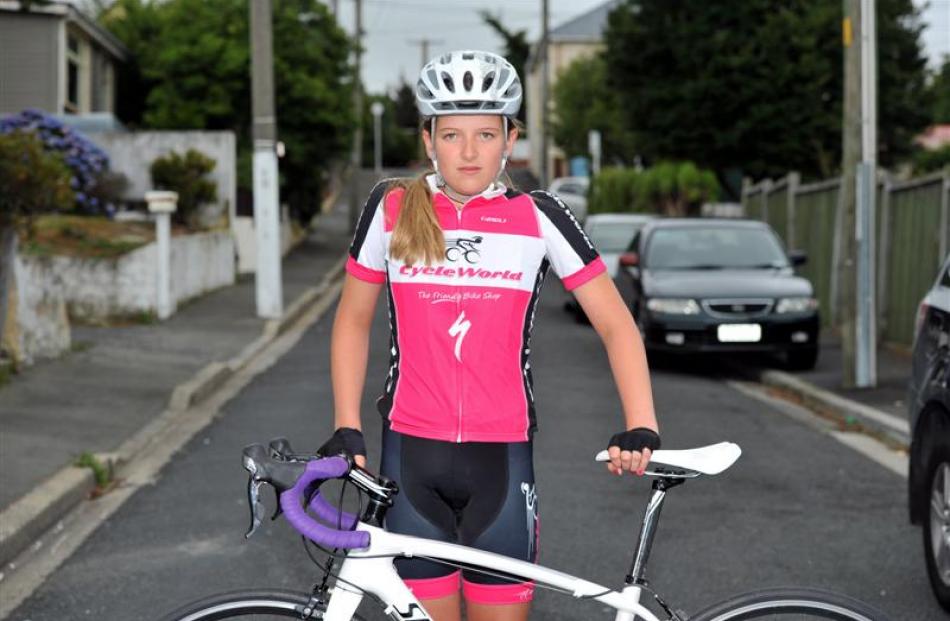 Dunedin cyclist Mila Rollo is sick of being abused when cycling on the city's roads. Photo by Gregor Richardson.

The aggression of Dunedin motorists towards cyclists has a mother fearing for her children's lives.

Lara Hearn-Rollo has made an impassioned plea for Dunedin drivers to treat cyclists with more respect after her 11-year-old daughter and keen road cyclist Mila Rollo was shouted at from a passing car when she was riding in Hillside Rd last week.

''She was the only one in her lane and was in the green section set aside for cyclists, there were no cars anywhere, until a lady pulled up beside her in the turning lane and starting verbally abusing her for `being another bloody cyclist on the road'.''

This was not the first such instance and her daughter was regularly abused, simply because she was a cyclist, despite being ''courteous'' towards drivers.

Both Mila and her brother, Caleb (9), pursued cycling as a sport - Mila trained daily - and the aggressiveness of some Dunedin drivers meant Ms Hearn-Rollo worried every time they went out.

She believed the aggression was because people resented occasionally having to slow for cyclists.

She feared the disrespect some drivers had for cyclists could lead to a death.

''My fear is that someone, maybe you, your friend, a family member of yours, will one day either be hurt or killed cycling on our streets, or be the person responsible for that death.

''So, the next time you're out on the road and there's a cyclist in front of you, all I ask is that you remember my plea and slow down; pass them carefully when it's safe for you, for them and for oncoming traffic.''

Her fear was heightened after coming across a Facebook page called ''NZ Drivers Against Idiot Cyclists''.

The comments on the page, where some members were calling for cyclists to be mowed down and killed, made her ''physically sick''.

Mila said it was unsettling coping with abuse.

''When they come up behind you it frightens me. You don't actually know what you have done. They do it for no reason,'' she said.

Mr Rollo said he had commuted by bicycle in Christchurch, New Plymouth and Auckland, and Dunedin drivers were the most aggressive.

''I think Dunedin drivers are a lot less tolerant. I think drivers down here think the road is for cars and trucks [and not cyclists].''

Both he and his wife accepted many drivers were considerate and not all cyclists behaved properly on the roads.

''There is a bit of education to be done on both sides,'' he said.

Spokes Dunedin chairman Dr Robert Thompson said he had also heard of young children, including those on their way to school, being abused by passing motorists.

''Unfortunately, it is quite common,'' Dr Thompson said.

He had heard anecdotally Dunedin drivers were worse than in other cities.

''People in Dunedin are used to being able to get pretty much anywhere in town with minimal interference of stop lights and traffic.''

That might mean people in larger cities where there was more traffic were more used to having to share the road and slow down for other users.