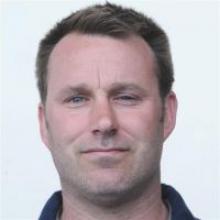 Coryn Huddy
Staging an event at Dunedin's new stadium is a team effort. And as Mark Price discovers, the team is really big.

When the Highlanders and Stormers clashed at the Forsyth Barr Stadium last night, all eyes were on the 30 rugby players and one referee charging around on the grass.

But beyond those 31 individuals, there is a far, far bigger team of people involved in turning this simple game of rugby into a spectator event.

The Otago Daily Times has been counting the jobs - from ball boys to chief executive - and has come up with a figure of 863.

That figure includes the Highlanders players and coaching staff, the opposition, the television camera operators, the traffic controllers, the plumber, the police, the ground painters, the pipe band members and Mac the Miner and his minder.

It assumes all the 350 catering staff will turn up this time and includes those who normally operate the "zoo", which for this game will not be in use.

The man responsible for ensuring it all goes right on the night is DVML operations manager Coryn Huddy. Trained as a groundsman, Huddy agrees there has been a lot to learn operating a new, "out of the norm" covered stadium.

But sitting in the warmth of the south stand, beneath the glow from the towering roof, he told the ODT he never expected a "walk in the park" when he moved from Carisbrook.

One of his big everyday issues is converting the stadium from one use to another.

"We've learned a huge amount about being flexible in terms of trying to deliver a product for all the different user groups.

"And I would like to think with each event we get slightly better."

He acknowledges the stadium has "dropped the ball" on some occasions - large numbers of catering staff not turning up and a brawl in the "zoo".

As well, traffic management around the stadium before, during and after big matches continues to be a problem as stadium staff try to maintain pedestrian safety while catering for vehicular traffic.

Huddy says the routes in and around the stadium "aren't ideal" and says he has fielded complaints from spectators about delays, particularly after matches.

"Everyone just wants to get home and they want to be in front of their TV 10 minutes later.

"Unfortunately we just haven't got the roadways or the capability at the moment to deliver that, and I don't know if we ever will, to be honest."

Huddy says the first big test of the indoor turf's ability to withstand a Dunedin winter will be the All Blacks v South Africa rugby test on September 15.

The ground might need to be taken "out of action" for a period in the lead-up to the test to ensure there is no negative feedback for the stadium or the city afterwards.

"You only get one chance at those big ones."

The scouts
Thirteen members of the Roslyn Scout Group sell programmes at the stadium and prepare giveaway packs for the "take a kid to footy" promotion.

Their two hours of work raises money to cover the fixed costs of their scout hall and, as a bonus, the 13 get to see the game free.

Parent Tony Mole - a West Bromwich Albion fan rather than a rugby fan - says it can be "quite frenetic" at times when a rush of people arrive for the bigger games.

"You are working quite hard."

However, the scouts have learned by experience that trying to sell the $3 programmes in the zoo area of the stadium is a waste of time, with just two sales in an hour there at the last game.

Compared with Carisbrook, the scouts have found the crowds much bigger and the temperatures much warmer, although it can still be windy.

"It's a hell of a lot nicer at the new stadium compared with Carisbrook."

The signwriters
The further into winter Dunedin gets, the more the four ground painters expect to appreciate practising their art in the new stadium rather than at Carisbrook.

Williams Signs and Graphix Ltd managing director Bruce Carvell says frosts were often a problem when it came to painting logos on the turf at Carisbrook.

"When you walk on frozen grass it actually bruises it, so when the frost goes away it comes up black. It just dies ... so we don't have that issue down at the stadium."

The painters also do not have the issue of wind blowing their patterns around and being rained off when time is pressing before a match.

"There's no downside from our point of view."

The painters do have to be a little more particular in the way they apply materials at the stadium because of the artificial strands of grass in the turf.

Mr Carvell says a logo on natural grass can be left to grow out like dyed hair but that does not apply to the strands of artificial grass which must be washed to remove the paint.

"So we have to be a little bit more careful and not overflood [the turf] with paint.""It's not a big call. It's just part of the deal."

Williams Signs also does other signage at the stadium which can be "challenging" to put in place because of the height of the stadium and restrictions on how the signs are attached.

The bandsmen
Nine members of the St Kilda Brass Band have been providing spectators in the "zoo" with short pieces of music appropriate to events on the field.

President John McAdam believes this new departure for the band worked well and although other commitments mean the band will not be at the April 7 Highlanders v Stormers match, it was likely to be back for the Blues on April 20.

Mr McAdam says the band had not been a part of the Carisbrook entertainment for at least 10 years and he acknowledged "a brass band marching around a paddock" was not something spectators wanted to see.

However, playing "little sound bites" at the back of the heads of zoo spectators, from bands such as Dragon, Herbs and the Exponents, had been a lot of fun even though it was hard work "... just because there was so much noise and, let's say, an enthusiastic crowd around us".