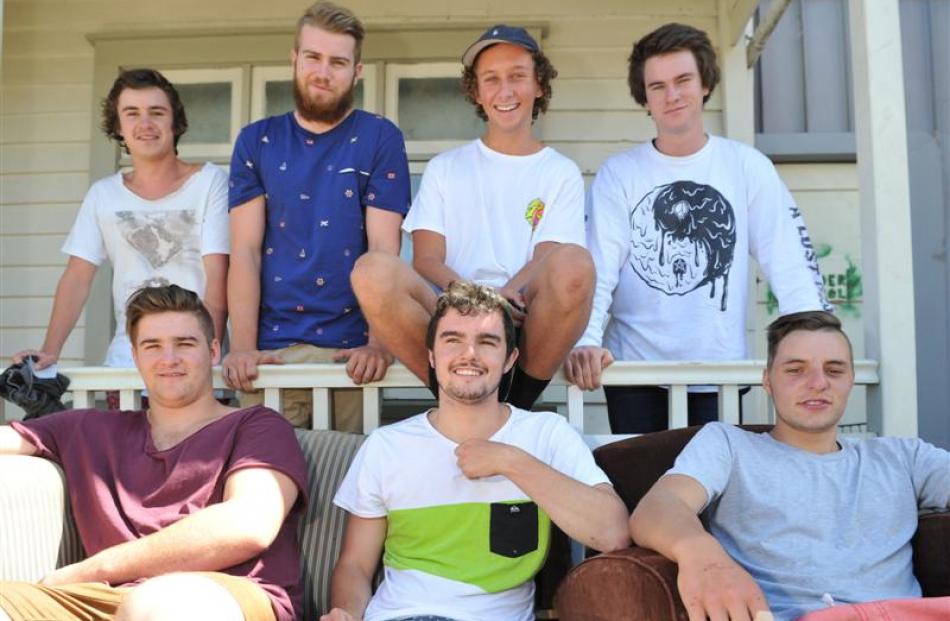 Hyde St residents (back row, from left) Maukino Skelton, Chris Clapham, Alex Battersby and David Askew; (front row, from left) Leon Pye, Scott Watson and Marcus Milne say their party on Saturday night was big, but not out of control. Photo by Gregor...

The Dunedin flatmates behind a street party which attracted more than 1000 people last weekend say they cleaned up 550kg of glass afterwards and took it to the dump.

The party in Hyde St resulted in the street being left in such a mess that a council contractor reportedly refused to clean it on Sunday.

Dunedin City Council roading maintenance engineer Peter Standring said yesterday the council's ''agreed general approach'' was that those who made the mess were responsible for cleaning it up.

''DCC contractors had already been into the Hyde St area twice over the weekend to pick up rubbish that was a potential hazard,'' he said.

''They did not clear the street [on Sunday] as that was not the approach agreed to and the amount of broken glass and other litter meant there were also health and safety issues.''

Flatmate Leon Pye said the flatmates spent $200 hiring a trailer and cleaned up 550kg of glass, taking it to the dump on Sunday afternoon.

''We didn't care about tidying up because it was our party,'' he said.

''It wasn't their [council's] rubbish to clean up, so fair enough.

''We didn't just clean in front of our flat, we cleaned the whole street.''

Flatmate Scott Watson said a ''handful'' of trouble-makers had attended the party and caused most of the problems, including an attempt to set a couch on fire.

Mr Pye said the fire was extinguished before it ''got to flames''.

''It was more people trampling over it,'' he said.

''You can't control that [glass being broken] - we are students; we can't pay for security.''

The group felt the party had run smoothly with no major issues.

Acting Senior Sergeant Jared Kirk said the party ''wasn't too much of an issue'' for police.

There were no arrests or fires reported.

Acting Snr Sgt Kirk said no incidents of assault were reported to police.