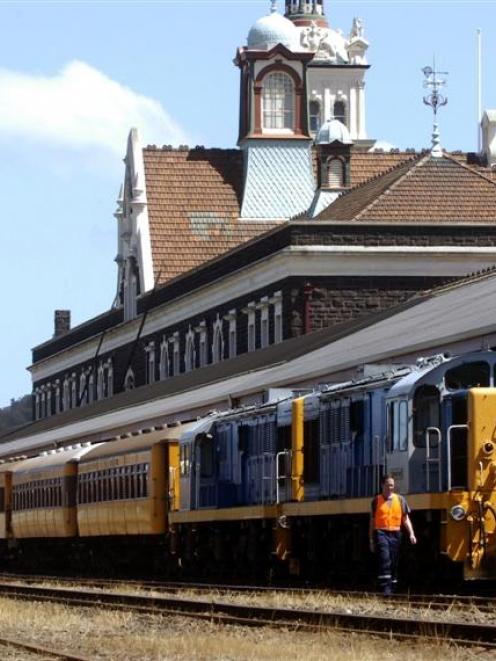 The Taieri Gorge Train. Photo by Jane Dawber.
The final of the Rugby World Cup will not come soon enough for one of the country's largest tourism operators, which has labelled the tournament a "disaster" for the Dunedin company.

"Tourism has had every hit on record - swine flu, bird flu, the Asian economic crisis, fuel spikes, and the global recession - but we have never had a hit like that," Taieri Gorge Railways chief executive Murray Bond said.

Business was down 19% last month compared with the previous year, the biggest drop on record for the majority owned Dunedin City Council company, and the worst September in five years.

That drop translated to 400 fewer fare-paying adults during a month when a 1000-passenger increase was forecast, and "it is a disaster for us".

Mr Bond puts the blame squarely on the tournament, with regular "bread and butter" tourists scared of visiting due to higher prices and the influx of rugby fans.

The company rolled out the welcome mat for tournament visitors, spending an estimated $10,000 on advertising in official Rugby World Cup brochures, and hosted 50 international media on the excursion train.

"We were told 'you are going to be run off your feet', but the reality is it has been very disappointing.

"You would expect the Rugby World Cup tourists to do some of the attractions, but they certainly didn't have a train trip."

In addition, the company serviced all of its carriages in preparation for the anticipated influx rather than stagger servicing throughout the season.

"We tried our best to maximise the numbers and we were down 19%, and consequently I am looking forward to when the Rugby World Cup is over."

Mr Bond said October was also trending downwards and he hoped some of the thousands of fans who were in the North Island for the knockout phase of the tournament would venture south.

With an annual turnover of $5 million, Taieri Gorge Railways was one of the country's largest tourism companies, and a favourite of visiting cruise-ship passengers, he said.

"We were expecting a reasonable profit this year, but it is now clear it has been wiped out by the big downturn in business for September-October, he said.

However Royal Albatross Centre manager Mark Jurisich could not be more happy with the Rugby World Cup, with September doubling its budgeted revenue, and October also performing strongly.

A good number of rugby supporters in campervans visited the Taiaroa Head centre, and "we are not sure if we are going to get more, but we are very happy with what we have".

While wildlife and the Otago Peninsula proved a drawcard for rugby visitors, the historic home of Olveston was largely shunned.

"It is one of the worst two months we have had for a long, long time," manager Grant Barron said.

"These are shoulder months and normally we are starting to tick."

A noticeable drop in coach tours, largely attributed to the Christchurch earthquake and the Rugby World Cup, had affected usual visitor numbers, he said.

"But these things go in cycles."