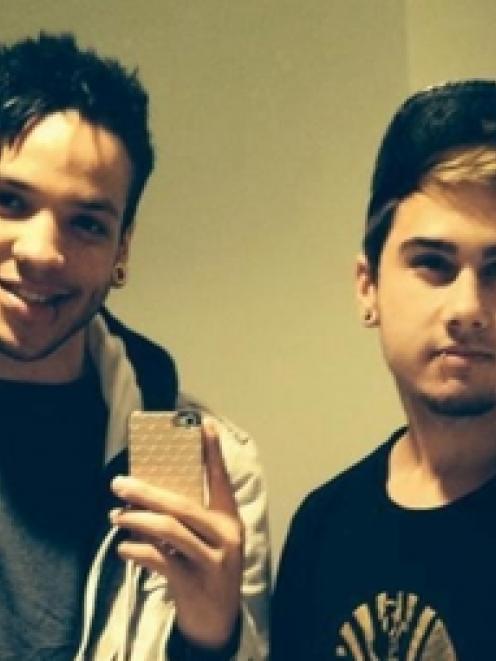 Joseph Parker and Beraiah Hales have boasted online of their actions.
Auckland police have rejected suggestions an inquiry into the "Roast Busters" group was affected by the involvement of a police officer's son.

"Recent cases have highlighted that police will not hesitate to thoroughly investigate staff facing allegations of a criminal nature and will put them before the court if there is a case to answer."

The investigation into the group's actions continues. Two of the young men spoke with police yesterday afternoon and that information is now being assessed by the enquiry team.

A Senior Detective independent from the investigation has been brought in from outside the Waitemata District to provide extra support, Mr Searle said.

Police were aware of a number of social media sites created by vigilante groups threatening violence towards members of the Roast Busters group and cautioned them against taking the law into their own hands.

"We understand the outrage that this group has caused, however violence will not be tolerated and we will take firm action against anyone inciting, threatening or using violence against these people," Mr Searle said.

One vigilante group set up offers a "4k reward for footage of Roastbusters getting hidings''.

"Will pay for footage of the RoastBusters being taken care of. We do not encourage violence, simply if you happen to have footage, we'll buy it from you. Just as a news channel would ...''

A post last night said: "Private message once you have footage. Preferably HD. If you are unable to help with the video but would also like to see the footage please spread the word to make finding footage more likely.''

One man last night said there were at least 52 "irate, angry fathers" ready to dish out their own brand of justice.

He said feeling in the community was so strong that he had received phonecalls from gang members wanting to get involved.

"We are not law breakers or criminals, we are just fathers. The scum has entered our streets, the police have allowed the scum to carry on, and now shi**s going to hit the fan, and spray all over the police and all over the people's families, unless the police themselves jump up and take responsibility."

One of the young men at the centre of the 'Roast Busters' scandal has been sacked for his "despicable behaviour''.

Joseph Levall Parker was fired from his job in an Auckland real estate office amid a public outcry over the group's online boasts about stupefying underage girls then having sex with them.

One member of the group made an anonymous apology on Facebook and two members came forward to police yesterday, but a concerned father last night claimed he had dozens of people ready to take vigilante action if no charges were laid.

It is understood at least one of the girls who got involved with the group has attempted suicide.

Mr Parker failed to show up to work yesterday but his manager said he had since been fired. The manager said he acted in the "strongest possible fashion'' once he learned of Mr Parker's association with the group.

His brother, Anthony Parker, worked in the same office but didn't show up yesterday.

His employer said Anthony would get the ``opportunity to provide evidence that he has had no part to play in this despicable behaviour", or he too would be sacked.

According to Anthony Parker's Facebook page, he became a father on Sunday night, when the scandal broke. Last night he had changed his work status to self-employed. He did not respond to a message requesting comment and his brother closed down Facebook page yesterday.

It is not known how many people are part of the Roast Busters group, but Joseph Parker - not the high-profile boxer - and Beraiah Hales boasted of their involvement in a video posted online.

Police confirmed last night that one of the members was the son of a police officer. The Parker brothers are the sons of Hollywood actor Anthony Ray Parker, who appeared in The Matrix.

"Anthony Ray would like his privacy respected here. He has no interest in speaking to the media.''

The group appears to have been based in west Auckland, with members going to schools including Green Bay High and Avondale College, according to their Facebook pages.

A Facebook page also mentioned Kelston Boys High School (KBHS), but Principal Brian Evans said this afternoon that the school was not linked to the Roast Busters.

Police have confirmed that KBHS was never part of their two-year investigation into the Roast Busters, he said.

Police had been monitoring the Roast Busters Facebook page for two years and had been in touch with schools those involved used to attend.

Detective Inspector Bruce Scott of Waitemata Police said the page had been left open for "operational and tactical reasons''.

"Whilst we acknowledge it was upsetting for the victims, it was being monitored for information or evidence that would assist our investigation,'' he said.

He insisted the group had been "vigorously investigated'' but that there was nothing more police could have done to bring a case to court.

"We continue to look for evidence that will assist us in determining whether there has been any criminal offending and then once we've got this evidence we can make a determination on what our next move is,'' he said.

"We continue to talk with girls involved in the group. The difficulty is that we don't want to re-victimise the girls, some of them don't wish to engage with us and we can't push them to talk to the police.''

Avondale College could not be reached for comment but Green Bay High principal Morag Hutchinson said it was disappointing the legal system didn't offer protection to the victims.

"We look to the law to protect us all, but especially those who are vulnerable because of their youth and naivety. For those of us who work with young teenagers, in this situation our role is to support the victims and their families.

"It is extremely frustrating when the perpetrators cannot be held to account, even when they brag openly about their actions in a public forum.''

"Our police pride themselves on being proactive. Surely that could have extended to tracking these youths down and clearly signalling that what they are doing is not OK.''

She described the lack of arrests and prosecutions as "astonishing", and said government ministers in charge of policing, justice and women's affairs "need to ask some hard questions and then take some action''.

Mr Scott fended off accusations of inaction and said police interviewed two men in relation to the page yesterday, including one who had previously refused to co-operate with the investigation.

The fact one of the men involved in the page was the son of a police officer had not influenced the investigation or the decision not to prosecute, he told 3News.

NetSafe executive director Martin Cocker said there was concern other young men would be inspired by Roast Busters.

"Just because someone boasted on a website doesn't mean it's true, and we don't want to start convicting on bragging.''