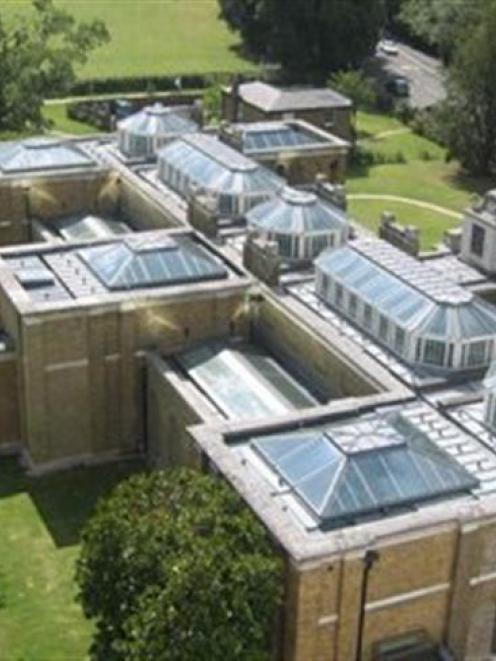 It is proposed to spend $3 million turning it into a sports hub.

This severely compromises the integrity of the building.

I'm all for adaptive reuse of historic structures, but this one just doesn't work.

The 1920s building was designed as a top-lit suite of exhibition spaces.

It followed the example of Sir John Soane's Dulwich Picture Gallery in London and has - or had - a very attractive double circuit of enfiladed galleries.

Because it was top lit - from skylights above island ceilings - its exterior had no windows, which gives the outside appearance a monumental feeling.

The exterior walls are subtly relieved with pilasters and a blind balustrade and at times have been planted with ornamental trees to excellent effect.

Putting windows in the walls destroys the monumentality as it also converts the interiors from inward-looking to outward-looking spaces.

This is a complete negation of the idea of the building and utterly compromises its integrity. It is a category 1 historic place. It is remarkable and sad things have come to this.

The building's significance is as a relic of the 1925-26 New Zealand and South Seas International Exhibition; as one of very few such buildings still on site anywhere in the world; as a memorial to the late Rolfe Sargood; and as an example of excellent gallery design.

It was compromised when its south end was removed some years ago and compromised again by a further truncation.

The Historic Places Trust has approved this latest plan and I don't like to be critical of the trust.

But this is letting the baby out with the bath water, destroying the village to save it.

The new use requiring these changes is simply not fit for purpose.

An optimal use would be for displaying things.

We turned the old Dunedin North Post Office, which was offices and an apartment, into an exhibition space and now want to make it serve conferences too.

Now we're thinking of turning an exhibition space into offices.

Our record and our plans are not great.

Both these proposals should be dropped.

Maintain the buildings and mothball them while better solutions are sought. We're capable of doing much better.

This is highly visible at the Octagon where Angels and Aristocrats: Early European Art in New Zealand Public Collections is a magnificent advertisement for both the nation's overseas holdings and the spaces showing them off.

The latter were partly modelled on the Logan Park galleries, but the installation is brilliant and I congratulate everyone concerned.

The curator is Mary Kisler, of Auckland, but apparently the installation team included Dunedin's Aaron Kreisler, Robyn Notman and Lynda Cullen. The result is a credit to them all.

Ms Kisler published a book of the same title last year and the show is only a selection of all the works the book reviewed.

It is still a great treat, though, to see so many brought together and instructive in very many ways.

The last such show I remember was in about 1962.

It is good to see that, despite considerable difficulties, the institutions have continued to collect.

The show draws on the holdings of the Auckland, Wanganui, Christchurch and Dunedin civic collections and the national one, Te Papa.

Not all the works are masterpieces - that isn't the point of the show - but there are gems aplenty among them and much which is simply fascinating.

Auckland's portrait of Master James Hay by Henry Raeburn is delicate and sensitive.

Their Madonna and Child by Marco D'Oggiono, an associate of Leonardo, is interesting for its reflection of da Vinci's Lady with an Ermine, painted about the same time, around 1490.

Wanganui's devotional picture by Domenico Piola is dramatic and has an unusual, painted frame.

Te Papa has a portrait of Captain Cook, painted by John Webber, showing the navigator looking like the bluff Yorkshireman he was, rather than the smoother person portrayed by Nathaniel Dance and known to us from the bank notes.

There are a few loan works too - Lady Boudagem among them.

But the review underscores the riches of our national patrimony.

Much can be achieved with thought and determination, even when the prospects seem difficult.