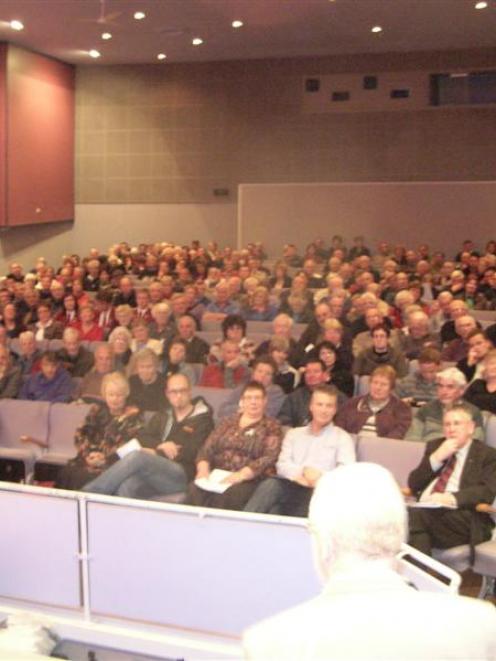 TrustPower community relations manager Graeme Purches was the only representative of a power retailer to attend the meeting and he received verbal abuse from the crowd for his efforts.

"I'm being asked to explain things on behalf of our competitors who haven't bothered to turn up tonight and I don't think that's fair and reasonable," he said.

The meeting, which started at 7.30pm in the War Memorial Theatre, was subdued until Mr Purches took the stage to try to explain the electricity sector and how power was priced, from generation to consumer.

People in the audience, many of whom were elderly residents, booed Mr Purches and interrupted him as he spoke.

"This is where most of the power is being generated and we are being stuffed with electricity prices. It's winding me up," Alexandra resident Jolyon Manning said.

His comments were met with cheers from the crowd and supporting comments, which included a call for people to switch power companies away from TrustPower.

A show of hands indicated about two thirds of the crowd were TrustPower clients.

Mr Purches cited the increasing cost of lines charges to Central Otago in winter, which were set by distribution companies and passed on to consumers through retailers.

After more than two hours, Central Otago Mayor Malcolm Macpherson, who initiated and chaired the meeting, tried to calm the crowd and proposed two resolutions to help residents struggling with power bills.

"We have to be careful not to shoot the messenger," he said.

Dr Macpherson asked for support to establish a relief fund which could help pay power bills for those most in need, and garnered opinion for a submission to be made to the ministerial review of the electricity sector.