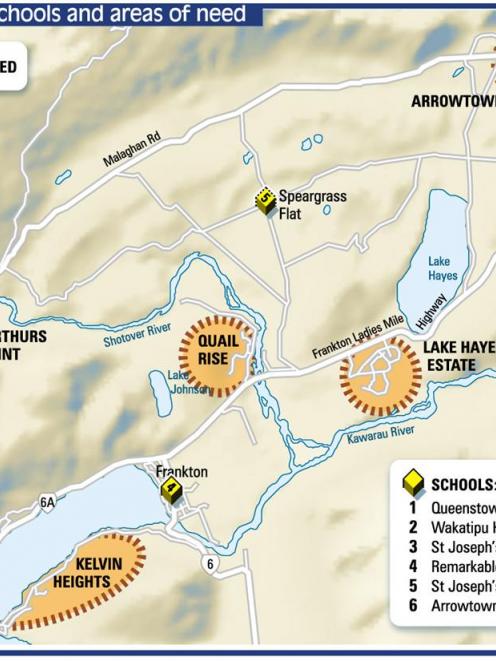 Queenstown schools and areas of need. <i>ODT</i> Graphic.
The rapid growth of Queenstown's population has led to questions about whether the region has enough schools to cater for its children.

In the past week, Remarkables Primary School announced, just 19 months after the $17.3 million facility opened, it was nearing its 460 pupil limit and could not handle numbers in its current area zone.

It was proposing a new zone.

This had raised concerns among many parents of potential pupils.

Kate Smith, of Lake Hayes Estate, one of the areas omitted from the new zone, said the announcement was disappointing because many parents in the area had counted on sending children to the school.

"It was zoned for us and it's a distressing and sudden announcement.

"We feel let down by yet another government department and it is just adding insult to injury," Mrs Smith said.

She was working with several other Lake Hayes Estate and Quail Rise parents on a campaign to raise awareness about the lack of educational options in the area.

Being "zoned out" and with Arrowtown Primary's cut-off point at the edge of Lake Hayes and State Highway 6, parents would have no choice but to bus their children to Queenstown Primary School.

Mrs Smith said the best outcome would be for Remarkables to expand its campus across the road, as it had proposed to the Ministry of Education.

Support from the Queenstown Lakes District Council would be the biggest issue, she said.

Queenstown's Lakes District Mayor Vanessa van Uden was out of town yesterday and could not be reached for comment.

Education Minister Anne Tolley said on Thursday the Ministry of Education always planned to build a new school at the Frankton hub.

"When I made a decision about the size of the Remarkables School, it was made on the understanding that there was going to have to be another school ... [further out of Queenstown] in the future.

"But I think it's taken everyone by surprise how quickly it [Remarkables school] has filled up."

Enrolment estimations suggest the school would reach 380 by term four and surpass its 460 limit by the end of 2012.

Queenstown Primary deputy principal Jim Turrell said it was well placed to accommodate up to 100 new pupils and the school had previously talked about expanding.

"There are lots of possibilities in the Wakatipu Basin, and Queenstown Primary is a very large site."

The school was given a $1.2 million "top-up" at the beginning of the year by the Government as part of a five-year modernisation agreement.

Mr Turrell said the entire Wakatipu school network was expected to be full within the next three to four years, "which will give the ministry a timeframe in which to act".

She said it was her "pet project to get those kids out from underneath those mountains" and on to a new site.

The lack of sunshine during the winter and the potential for a school in Frankton had resulted in many calling for the move.

Wakatipu school board of trustees chairman Alistair Nicholson said there was "the likelihood" of a new school in the next four to five years, and he was hopeful for "a shorter timeframe".

The call comes after $2.25 million of construction and improvement work began earlier this year.

Work at the school includes constructing a drama and music building, canteen, two new classrooms, and refurbishment of changing rooms.

Another with big question marks over its development was St Joseph's Catholic School.

It was in negotiation regarding a potential second campus at Speargrass Flat, but it could be another 10 years before any second site was operational.

Board of trustees chairwoman Gigi Hollyer said the proposal was being driven by the Dunedin-based Catholic Education Office.

For Kingsview School, previously the Southern Lakes Christian School, the past three years had also been a time of massive upheaval, with extensive modernisation works, full state-school integration, and the appointment of a new principal.

Kingsview board of trustees chairman Roland Lemaire-Sicre said it had been a long journey.

"We had a leaky building and it was quite a tiring experience for everybody involved to keep it running.

"Now that we have new premises, everybody is refreshed and it's brought a new lease of life to the place."

It was envisaged the school would eventually relocate, but Mr Lemaire-Sicre said, "that, for the moment, is under wraps".

SCHOOLING UP
Wakatipu Basin education at a glance:

Wakatipu High School
• Only secondary school in Queenstown.
• $2.25 million in development under way.
• Ministry of Eduction considering relocating the school to an as yet undetermined site, possibly at Frankton.
• Roll of about 800, catering for years 9-13.

St Joseph's School
• In negotiations over a potential second site at Speargrass Flat. The matter is before the Environment Court.
• Stable roll of 153 children, years 1-8.

Kingsview School
Administration complete for an early childhood centre to be built nearby, pending resource consent.
• Plans to eventually relocate; details to be confirmed.
• Roll of 13.

Queenstown Primary School
• 620 pupils, with a capacity of 720.
• No zone requirements.