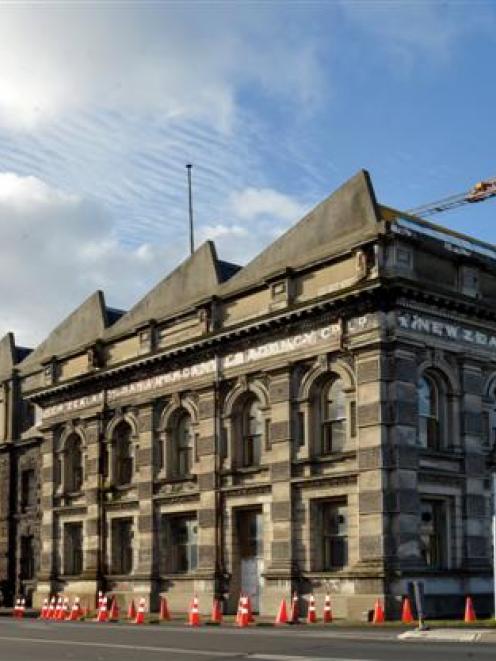 The New Zealand Loan and Mercantile Building on the corner of Thomas Burns, Willis and Fryatt Sts. Photo by Peter McIntosh.
A developer hoping to breathe new life into an historic Dunedin building has slammed the Dunedin City Council after a planner recommended his resource consent application be declined.

New Zealand Loan and Mercantile Building owner Russell Lund said he was ''staggered'' planners opposed his plan to restore the category two, 1872 building and redevelop the second floor into a 24-unit apartment complex.

His comments came after council planner Daryl Sycamore recommended the hearings committee decline a resource consent application for the project.

His recommendation was largely due to ''reverse sensitivity'' issues, which centred on concern apartment residents could complain to the council about noise from existing industry in the area, potentially threatening the viability of businesses in what was a non-residential (Port 2) zone.

Mr Sycamore did leave it open for the hearings committee to approve the application, if it was ''satisfied with respect to the reverse sensitivity issues''.

Mr Lund slammed Mr Sycamore's report, accusing him of basing his recommendation on personal opinion rather than legal precedent.

As a way of mitigating concern about noise the developers had proposed a ''no complaints covenant'', which would prevent it and residents from making complaints about noise.

''His biggest reason for turning it down [appears to be] that he simply doesn't like covenants. To me it is inexplicable that they think they have a right to second-guess the courts.''

''The planners appear to be having a dollar each way; they are saying 'We are going to decline it, but just in case you want to accept it here are a detailed list of conditions that we think you should impose'.''

If the hearings committee followed the recommendation, he could not see another viable use for the building.

''We have already invested a great deal of time and money to get to this stage and if it is rejected we would ... be extremely disappointed.''

He accepted Mr Sycamore left it open for the hearings committee, which is holding a consent hearing next week, to approve the consent.

''There is wriggle room there, but it raises the hurdle significantly higher for us to cross.''

None of the extra consent conditions recommended by Mr Sycamore were ''deal breakers'', but Mr Lund disputed the need for mechanical ventilation - which was suggested as a way of mitigating possible noise issues caused by residents leaving windows open to ventilate their apartments.

He believed the noise was not as bad as suggested by submitters opposed to the consent, which included Kaan's Catering Supplies Ltd and Farra Engineering Ltd.

''I've actually spent some nights in the building over the last couple of months to test that theory and there have been no issues whatsoever.''

In the report Mr Sycamore said the issue of reverse sensitivity was a ''key determinant in whether the committee approve this application''.

He noted his ''personal'' dislike of no complaints covenants, calling them a ''blunt instrument'' and ''not a suitable mechanism to address effects as residents will continue to be exposed to nuisance with no opportunity for redress''.

He said the DCC environmental health department's concern, based on noise monitoring in the area, was over ''sporadic loud'' noises at night, such as train shunting, which could wake and annoy residents.

''Irrespective of the [sound-proofing proposed], considered siting of the ventilation intakes and a no complaint covenant, it is my opinion that noise in some capacity may remain a nuisance,'' Mr Sycamore said.

Despite recommending against the resource consent, he noted many positives about the proposed development, saying as it was on the edge of the Port 2 zone it would not set a precedent for further residential developments.

Redevelopment would also be good for both the building and the area.

''The works would likely be a catalyst for further development and create vibrancy in the harbour area.''

He accepted the opinion of a council ''heritage policy analyst'' it would be difficult to ''identify a financially viable alternative'' if the consent was declined.