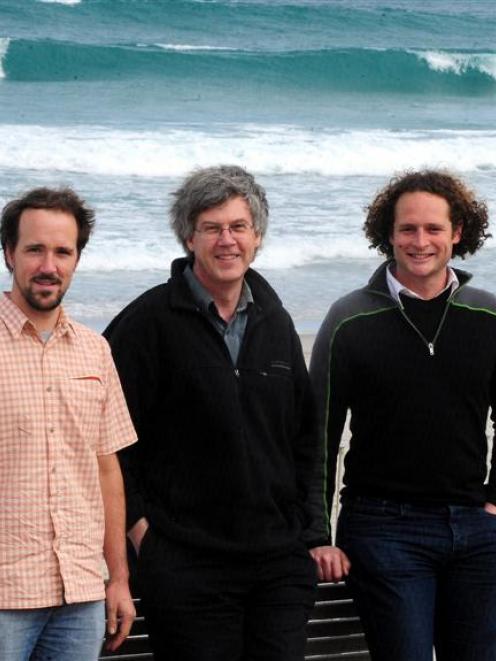 Renewable and sustainable energy supporter Solar Action co-chair Tim Bishop (left), with University of Otago scientists Dr Ross Vennell and Tim Divett, at the Esplanade, Saint Clair, yesterday. Photo by Craig Baxter.
There is no one solution to New Zealand's energy supply issues but a group of Otago scientists believes investing in "diversity" will go a long way towards easing them.

The forum was one of a series on energy issues, with others being held on small-scale wind power and turning waste into energy.

Solar Action co-chairman Tim Bishop said there was a need to get energy from renewable sources, as the availability of fossil fuels declined and climate change occurred.

In New Zealand, electricity demand continued to increase with people switching to heat pumps, for example. If electric cars became common, the country would not get by on what was being generated now, Mr Bishop said.

It was hoped the forums would publicise ideas, help understanding of the issues and show the country needed to be active in developing them.

Speaking before the forum, Mr Divett and Dr Vennell said there was no "silver bullet" to the energy situation, although New Zealand was in a better place than some countries, with 60% to 70% of its energy coming from renewable sources.

Diversity was needed so if one resource was affected, say by weather conditions, such as low rainfall in the case of hydro-electricity lakes, "then we can depend on wind and tidal energy, or vice versa", Mr Divett said.

However, the technology was in its early stages. About 40 different companies claimed to make devices to harness wave or tidal energy, but they were all "vastly different".

In New Zealand, three marine energy projects, involving Cook Strait, Kaipara Harbour, in Northland, and Tory Channel, in Marlborough, were in their early stages and they all faced many hurdles before becoming realities, he said.

Dr Vennell said while there were real opportunities for tidal energy, the technology needed to be developed before anyone could take advantage of them.

There was a huge amount of tidal power in Cook Strait but it depended on how many devices could be put in and the cost, he said.

The mostly likely place for wind or tidal generation in the South was at Riverton, which had the largest and most consistent waves.

"There's lots of power there, but there is the limiting factor of the cost of cabling [to get it anywhere]."

• Significant research and development going into devising technologies to extract energy from waves and tides.

• Those devised so far operate in a range of water depths; some areentirely submerged.