Supporters happy but others not convinced 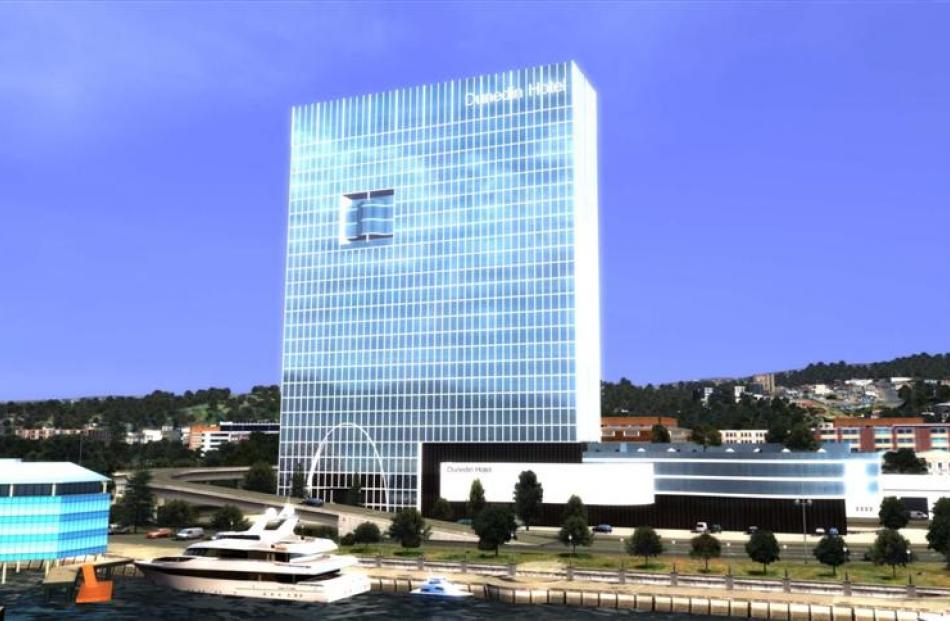 The old design for the proposed waterfront hotel, which critics say will need a serious overhaul before it satisfies all parties. Image supplied.

Supporters of Dunedin's proposed waterfront hotel are celebrating news of a deal to progress the controversial project.

However, opponents of the project - including two Dunedin heritage building owners - are questioning whether it really changes anything.

The mixed views came after the Dunedin City Council announced it had signed a memorandum of understanding with the hotel developer, Betterways Advisory Ltd, to try to advance the project.

Betterways director Jing Song, of Queenstown, said in a statement she was pleased the project was progressing.

''After a very challenging two years, we are delighted that the council has shown a commitment to our investment in this beautiful city.''

Otago Chamber of Commerce chief executive John Christie also welcomed the news and praised the hard work of both sides behind the scenes.

''I think it's potentially very exciting for the city to be able to work through a number of the concerns and issues to a point where, hopefully, they can be resolved and a development can occur within the city.''

However, Dunedin heritage building owner Stephen Macknight said concerns about the hotel's height remained a key issue, and he doubted the deal changed anything.

That opposition would remain unless the developer was prepared to consider ''radically'' changing the design, to minimise the impact on surrounding heritage buildings including his own, he said.

Without such an agreement, he predicted the project would eventually end up back in the Environment Court.

''I'm all for trying to look for solutions to problems ... if this is the best solution they can come up with, I don't think it's moved anything forward particularly.''

Owner of the former chief post office, Geoff Thomson, of Distinction Hotels, was also unconvinced by the plan, which could see the new hotel disrupting some harbour views from his building.

He recently unveiled plans for a $15 million redevelopment of the former chief post office, to turn it into a four-star plus hotel and offices, work on which was finally under way.

The new hotel would also introduce more competition into the market, although Mr Thomson said he was not yet clear what impact that would have on the economics underpinning his hotel.

However, Mr Thomson, who lived outside Dunedin, said he had little choice but to ''put up with'' the new hotel, if built.

''It's up to the people who actually live there full time to determine what they want to look at and put up with.''

Dunedin heritage building advocate Peter Entwisle went further, urging the council and Betterways to give up their plans altogether or find another site.

He doubted the urban design panel would be able to produce a revised design that satisfied all parties, including critics of the project, while protecting surrounding heritage buildings.

The proposed hotel's height and location, next to low-rise heritage buildings, were key issues, and any building that resulted from the deal was likely to be ''some form of skyscraper'', he said.

Even the idea of a bridge, linking the hotel and waterfront with Queens Gardens, should be opposed, because it would disrupt the last remaining ''view shaft'' directly from the central business district to the harbour, he said.