Rattray St overbridge would block last view through to harbour 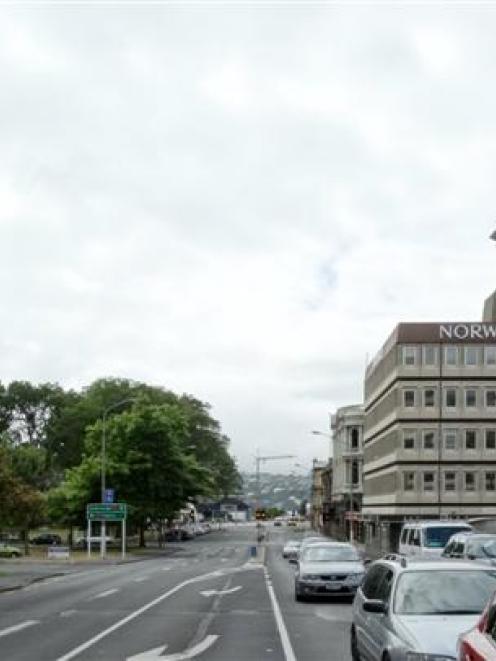 Looking east from Princes St along the line of Rattray St. Photo by Peter Entwisle.
In my last column I repeated the objections to a proposed pedestrian and cycle bridge at Rattray St over the railway to make a link between the central city and the harbourside.

A link would be good but any bridge, even a narrow one for pedestrians and cyclists, would reduce the last remaining view from the central city of the harbour waters and the hills beyond. This was a key feature of Charles Kettle's design for the city in 1846 to 1847.

There used to be such views down every east west street from Albany to the Oval, now there's only this one. It would be more than a pity to lose it. I proposed an underpass instead.

The proposal had been left without funding in the 10 year plan but the next day it was reported it had been revived, at a possible cost of about $3million, with a contribution perhaps from the New Zealand Transport Agency.

No mention was made of any alternative. I was at a meeting later that week where council staff were giving an update of things happening, or to happen, or possibly happen, regarding the redevelopment of the Warehouse precinct.

The ''connection'' to the harbourside was mentioned, so I expressed my concerns again. I said even if an underpass cost more, it would be better to wait until it could be afforded than eclipse the view.

A woman staffer who has some knowledge of or involvement in the matter - whose name, to my shame I immediately forgot - said an underpass would be investigated and might not cost more than a bridge.

From remarks made by other staff, the thought seemed based on the cost of the pedestrian and cycle underpass at Clyde connecting the rail trail to the centre of Clyde under the state highway. That was a bit reassuring but my concern remains.

That day I sent emails about this to the Mayor and all the councillors. (The one to Cr Chris Staynes was wrongly addressed so I re sent it yesterday.)

So far I have had replies from the Mayor and Crs Lee Vandervis, Kate Wilson, John Bezett, Andrew Noone, Andrew Whiley, Hilary Calvert and Neville Peat. I appreciate this, because I'm aware that such correspondence takes time to read and reply to and the elected representatives have heavy demands on their time.

Some were just acknowledgments of receipt of my email and others were fairly non committal. Several reiterated that all options would be investigated and some produced interesting thoughts and information.

Cr Vandervis thought a level crossing would be best and that KiwiRail might be persuaded to do this, in exchange for closing the St Andrew St crossing and some land swaps.

I think that would be good, but things KiwiRail has said in the past have left me with the impression it might not be very interested. Still, it would be good to ask.

Cr Vandervis also said the question of an underpass was investigated quite some time ago and the physical difficulties virtually ruled it out. I, too, recall some investigation quite a while ago but my impressions of it were different.

An underpass beneath Cumberland St to improve access to the settlers museum would be very difficult, because the main sewer runs there, but one further east wouldn't have that problem. I asked Cr Vandervis if the relevant reports could be found, or people involved in those investigations, to inform this discussion.

John Bezett, Kate Wilson and Neville Peat thought that by clever design or by building a relatively narrow and unobtrusive bridge the view through might not be compromised too much.

As that is now the only such view through left, and as it has already been reduced by placing one of the Chinese Garden's Pai Lou or gateway's pillars in it, no further losses should be entertained.

Before that was built, while it was still a proposal, I drew attention to that aspect of it in this column and the reasons that view through should not be intruded upon, even in this fairly minor way.

It was built regardless and years later, when we were both down there, the Mayor who presided over that, Peter Chin, asked me where was this step out into the street line. I pointed it out. It was something he had not really noticed.

That is why I'm concerned when a project is being progressed and a key aspect like this appears to be getting overlooked or short changed.

It was also said to me by one councillor and this was reflected by things others said, that if New Zealand Transport Agency money was available several around the council table were inclined to take on the project without matters such as this being properly investigated.

My hope is this time it will be. My plea is ''No bridge please''.