Delivering ice-creams as a team 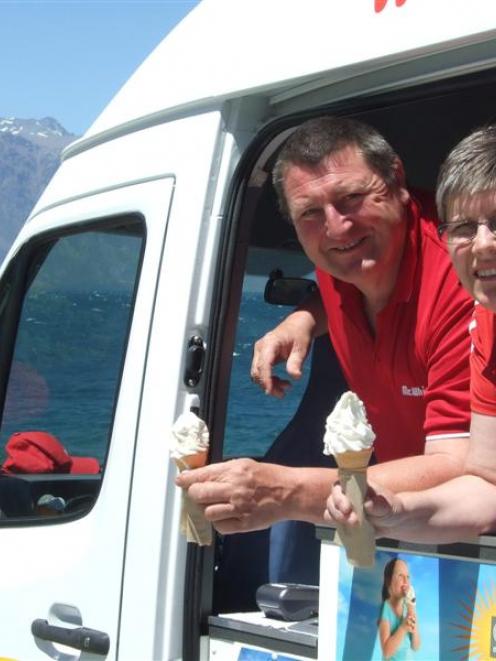 New Central Otago Mr Whippy franchise owners Steve and Linda Mitchell are proud to be bringing back a slice of Kiwiana long absent from the Wakatipu. Photo by Joe Dodgshun.
After 12 years without the ice-cream van and its equally recognisable Greensleeves tune, a husband and wife team have set about bringing Mr Whippy back to the Wakatipu.

Cromwell-based couple Steve and Linda Mitchell, previously known to many as the district's Provender team, earlier this year bought the seldom-used franchise off a Wanaka man.

Seeking a change in lifestyle after Linda was last year diagnosed with, and beat bowel cancer, the two are selling the Provender franchise and together are covering Queenstown, Wanaka, Cromwell and Alexandra.

Six weeks in and the Mitchells are loving it.

Using their knowledge of the district, the duo visits suburbs of the area no more than once a fortnight, placing "unfair demands" on parents of excited kids.

Linda says it is not just the children you have to worry about: about half of all sales are from adults who come running when they hear the familiar tinkling tune from the van.

In addition to doing the district rounds during the week, Steve says there has been a strong surge of Mr Whippy bookings for events, as Queenstowners look for a "Kiwiana" injection.

So far, this has meant turning up at Christmas work dos, parties, galas, rodeos and, last week, the annual meeting of Hilton Hotel directors at Kawarau Hotel.

"It's unique, it's Kiwiana and its part of a tradition that's been around in New Zealand since 1964," Steve said.

The event the pair are looking forward to the most is the Cromwell Relay For Life in March, from which they will donate proceeds taken in 24 hours to "give back to the cancer foundation".

As they take turns fielding questions, it becomes apparent the two work pretty well together as a team.

As they sell the Provender franchise, Steve continues to work it in the mornings while Linda drives the Mr Whippy van, meeting up again in the evenings when Steve takes over the reins of the ice-cream machine.

"We've also got a pretty good system going. Steve does the ice-cream, I decorate and we get through the lines fast," Linda said.

"But I know my place: Linda's the boss," Steve said with a grin.

Despite the summer obviously being a peak time for ice-cream sellers, they say they will continue the rounds all year, instead of shutting up shop having just built a customer base.

That and "people love ice-creams all year round", Linda said.

So, after six weeks, the big question is are they sick of eating ice-creams yet?

"I haven't got sick of it yet," Steve answered. "We will have to see by the end of summer."