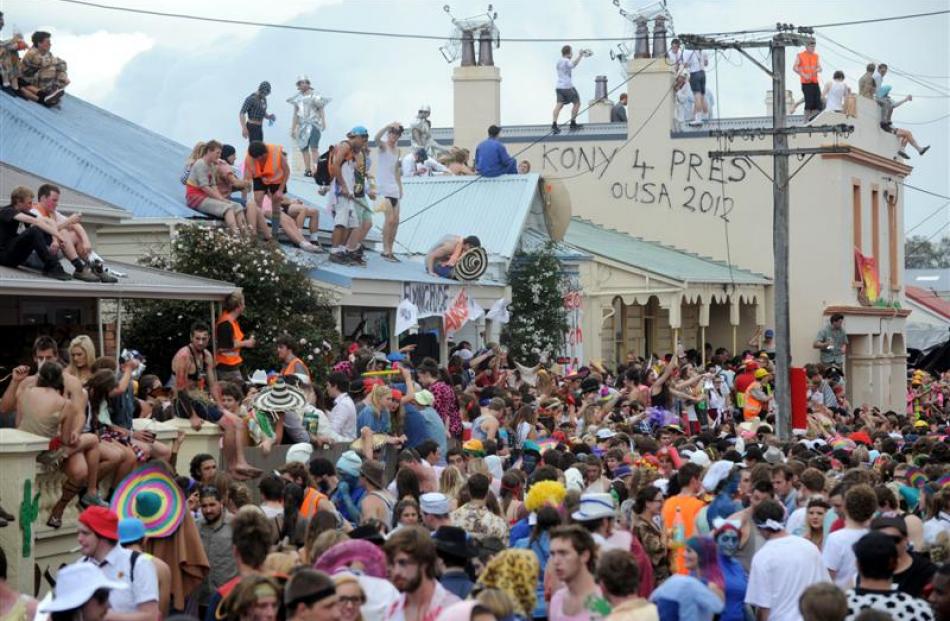 The street at the height of the party on Saturday. 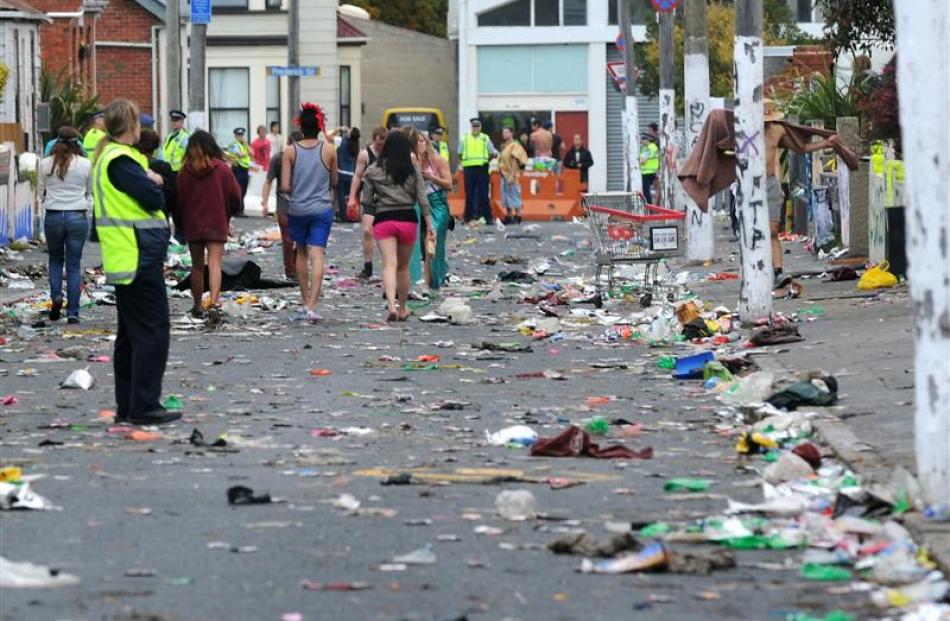 A messy Hyde St at 6pm on Saturday. 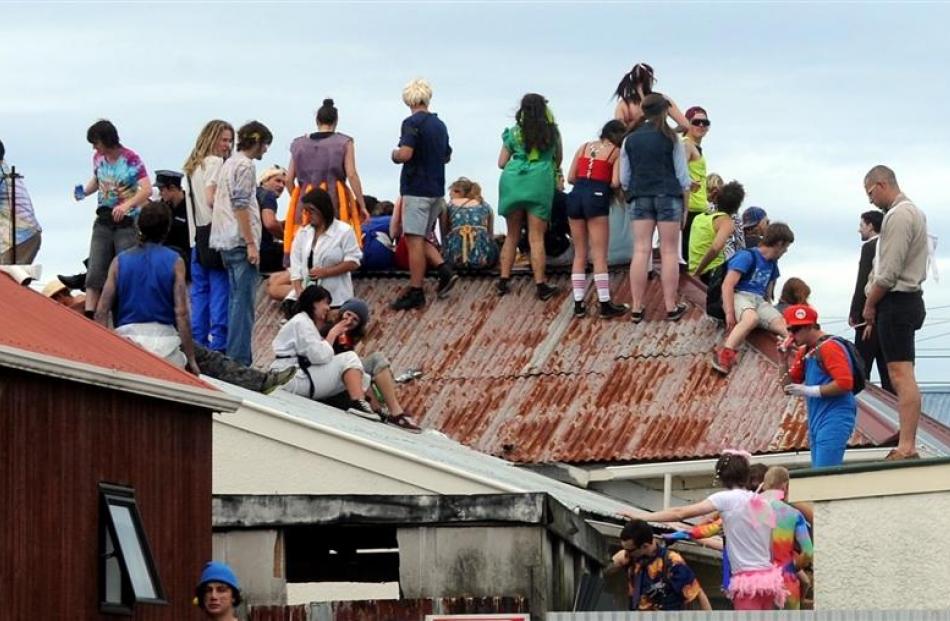 Revellers on the roof of John Leslie's property, part of which later collapsed. 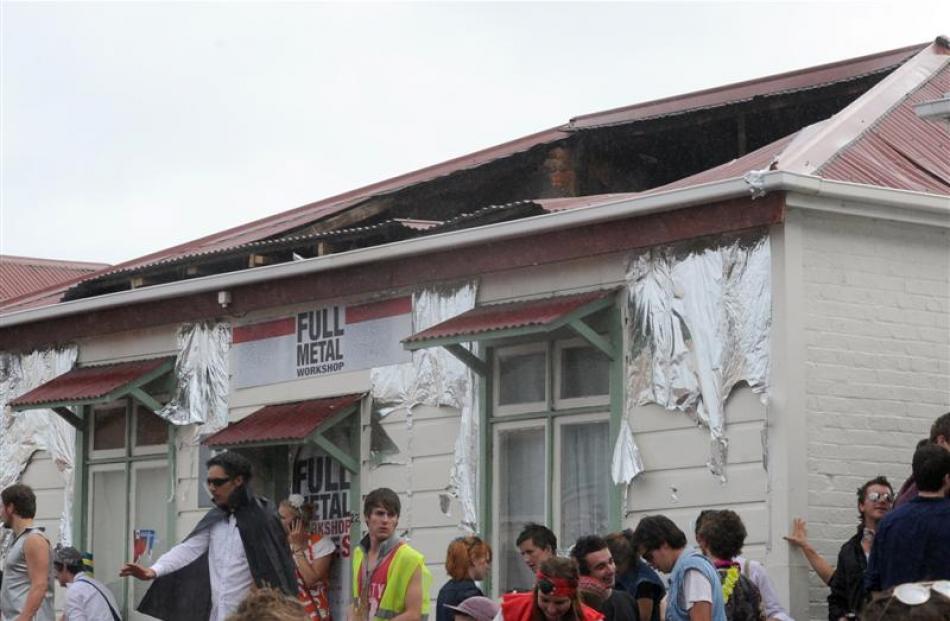 Hyde St landlords want the keg party in their street stopped after being left with thousands of dollars worth of damage after Saturday's all-day drink fest.

The landlords of two flats that need sections of their roofs replaced after the party say they will be contacting all the landlords in Hyde St, asking them to band together to put pressure on the University of Otago and the Dunedin City Council to have the party stopped and to deal with the excessive drinking of some students.

John Leslie, the owner of a property shown in one video posted on Facebook with its roof collapsing as revellers jump on it, said yesterday he had had enough and would speak to the other landlords.

"It's the booze. We've just got to curb this sort of behaviour. We've got to get the message across to these kids about the alcohol. They have had a good run, and we've got to come down on them, heavy.

Mr Leslie said he had considered evicting his tenants, but he could not prove it was them who did the damage.

Landlords in the area were constantly repairing damage caused during drunken antics and were seldom able to prove who caused it, she said.

She, too, would be approaching other landlords.

"We'd be really disgusted to think this [the Hyde St keg party] is going to happen again next year."

Police and the university yesterday said they were reasonably happy with how the party went, although they were concerned about how dangerously drunk some people got.

People started drinking in the street soon after 5am, and at the party's peak about 3pm it was estimated about 5000 people were crowded into the area.

During the day, 15 people were arrested, a roof crowded with revellers collapsed and 80 people were treated by St John.

Numbers started thinning out after 4pm, after police instigated a "one-way door policy" at each end of the closed-off street and starting turning off stereos.

The large number of people sitting on house roofs drinking alcohol was a recipe for disaster, especially when one roof caved in, Dunedin-Clutha police area commander Inspector Greg Sparrow said. It is not clear if anyone was injured in the incident.

Insp Sparrow said sitting on roofs drinking was "extremely dangerous and foolish", and put at risk the partygoers and police staff who had to get up on to the roofs to try to get people off.

People were arrested for a variety of offences, all involving alcohol, but for the most part people were well behaved, he said.

University vice-chancellor Prof Harlene Haynes said she spent most of the day in Hyde St and shared police concerns about the level of drunkenness, particularly later in the day.

Prof Hayne said she planned to work with students to find "new and creative ways of minimising alcohol-related harm".

She thanked the OUSA for "all the time and money" it had put into the party's organisation and said its contribution made the event substantially safer.

She also thanked the police, St John, Dunedin Hospital's emergency department, the Fire Service, Student Health and Christian student group Red Frogs for their help in managing some of the consequences of the party.

While the party was traditionally organised by residents of Hyde St, this year the OUSA organised Portaloos, water stations, fire extinguishers, barbecues, generally assisted attendants, promoted a glass ban and worked with security staff at the event.

Police maintained a large presence in the street all day.

St John sent eight staff with two ambulances and set up a first aid tent in nearby Albany St. St John treated 80 people during the day, largely for cuts from falls or on corrugated iron, injuries from falls from heights, including several suspected ankle fractures or severe sprains, concussions and varying states of consciousness.

This year it was better prepared, although staff were still "run off their feet" all day.

Most people were dealt with at the first aid tent, which became a sort of triage centre for Student Health and Dunedin Hospital.

He was unsure how many people were taken to the hospital's emergency department, but the ambulances were ferrying patients "pretty constantly"during the day. A query to the Southern District Health Board was not responded to yesterday.

Mr Jasperse also heaped praise on the OUSA for all its hard work to keep people safe at the event.

"It was a massive effort."

Dunedin Mayor Dave Cull was not in the city on Saturday but after seeing news coverage of the event said the city council, the university, OUSA and police would need to hold a debriefing to help decide "what the attitude will be to allowing a repeat".

In February, the council voted to approve a liquor ban that would permanently include the North Dunedin student area, allowing police to end the keg party.

The push for the ban had not come just from police but from the university as well, and Mr Cull was clear then the keg party was "too dangerous to continue".

The public consultation period which precedes hearings finishes today and Mr Cull said the result of that process would have a bearing on the issue.

But he had been impressed with the "responsible attitude" shown by residents and the OUSA when he met them to discuss the party, and he had donated a few hundred sausages to the event for barbecues on the day.

The issue to be dealt with was public safety.

"That's what the liquor ban would be aimed at assisting."