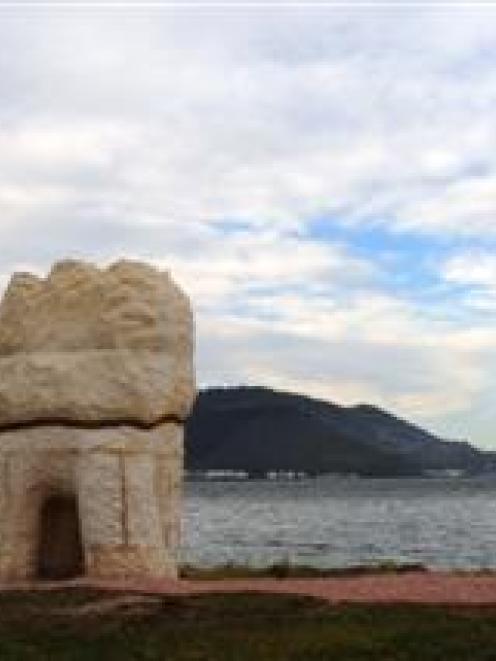 The Harbour Mouth Molars installation, on Portsmouth Dr, Dunedin, was accepted for the city by Cr Richard Walls from artist Regan Gentry yesterday. Photo by Craig Baxter.
Love it or hate it, Dunedin's newest public art project was officially blessed and accepted by the city yesterday.

Gentry said the nationwide media coverage the installation had attracted was unexpected, and though he was tired from long days completing the work, he was "very happy" with it.

[comment caption=What do you think of the Mouth Molars?]"It's given some character to the place which certainly wasn't there before," he said.

After defending his work from public criticism last week, with many Otago Daily Times' readers thinking it was an April Fools' Day joke, he has had a lot of support over the past few days.

"So many people have come out saying `it's great'."

Gentry, who was unsure what his next project would be, will return to Rotterdam, where his partner is studying, this weekend.

When art moved outdoors, it went into the arena of public debate, she said.

"This happens. It always does. It's change, it's new. It's a brave artist that works in this area."

The Dunedin City Council's art in public places programme, which funded the project, also deserved credit as it too became part of the debate, Ms Caldwell said.

However, she knew the programme would bring "enjoyment and stimulation" to the community as it grew.

Gallery curator Aaron Kreisler, who sat on the advisory committee with eight others, said the public needed to "look for themselves" and draw their own opinion on the sculpture.

While he knew public art divided people, he was disappointed the starting point for debate around the piece was the "financial figure".

The installation was designed to decay and change over the years and Mr Kreisler looked forward to seeing how it altered.