Students say many flats not worth rental 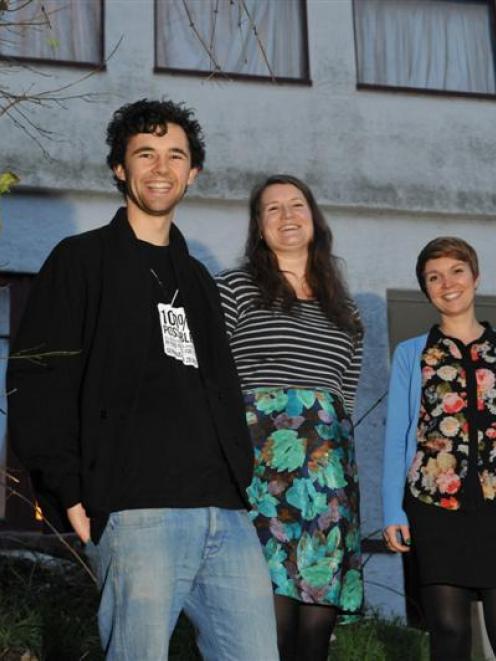 Outside their Dunedin flat are (from left) Cade Bedford, Jess Leov and Ellen Sima. Photo by Gregor Richardson.
The six students who took on the challenge of cleaning up Dunedin's worst flat believe Dunedin landlords are exploiting students by charging too much for very little.

Dubbed the Chateau, 47 London St was last year voted the worst flat in Dunedin in the Otago University Students Association's Student Flat awards and its 2013 residents said there was good reason.

Since they began an environmental purge of the flat in January, the Generation Zero members had made only a dent in what was a total mess and dedicated every spare minute from study to do so.

Flat resident Cade Bedford (22), a biology honours student, said flats such as this were commonplace in Dunedin and it was unacceptable students were paying such high rents.

''People are paying $140 for a room in a house that has no insulation, no heating and broken windows.''

Mr Bedford said students who arrived from outside the province were often caught out when flat hunting because they were unaware of other options.

''A lot of them don't know, because they come from their cushy homes and stay at a hall for a year and then move into these flats.''

Most student flats are leased for 12 months.

''Landlords take advantage because that extra buck [an additional $20-$30 for a higher standard flat in a good location] is quite a lot for a student.''

It was unusual for older students to choose to live in this environment. However, the six of them chose to lease the flat on the condition they could make changes to improve the health of the property as part of a Generation Zero project.

Tasks had included removing metres of bush, resurrecting a vegetable garden, cleaning up the backyard where they found glass that amounted to a 1m square pile, insulating the roof and floor through the council's insulation scheme, plumbing work, placing locks on the doors and putting doors back into doorways. A pellet burner is due to arrive next month.

Wall insulation for the house has been delayed after the tenants discovered rot in the wooden framing that needed repairs.

''This is probably the cheaper end of the scale.''

The flat's landlord resides overseas and could not be contacted.

Mr Johnston said there was more awareness in the property rental market about what was expected from tenants.

''Landlords are taking more notice of their income stream ... because it is a business. They have to invest.''

Student exploitation by landlords was not relevant in the case of 47 London St, because the six students had ''handpicked'' the flat for improvement, he said.

''These people took a project on to tidy up for better living, with cheaper rent, so it's the satisfaction of the project, really,'' Mr Johnston said.

The London St tenants were receiving value for money, he said.

Tenant Ellen Sima (25) moved from Canberra at the beginning of the year to study for her master's degree in science communication and said she was shocked upon arrival.

''I've taken a step backwards. I was in Australia and had never seen houses like this before. This is just years of neglect.''

Ms Sima reasoned landlords had not upgraded these flats because of the risk of students damaging their property.

''There is still some onus on the student. There are some who do ruin places, but they are the minority and there is no incentive to keep it clean when it is already a dive.''

Mr Johnston said he had not struck a landlord who refused to upgrade because of potential damage and did not believe it was common.

The hope of the flatmates was that more students would choose a healthy home and they believed there had already been some change in people's preferences.

Mr Bedford made a submission on the Bill, which was created with the purpose of creating a new framework for social housing provisions.