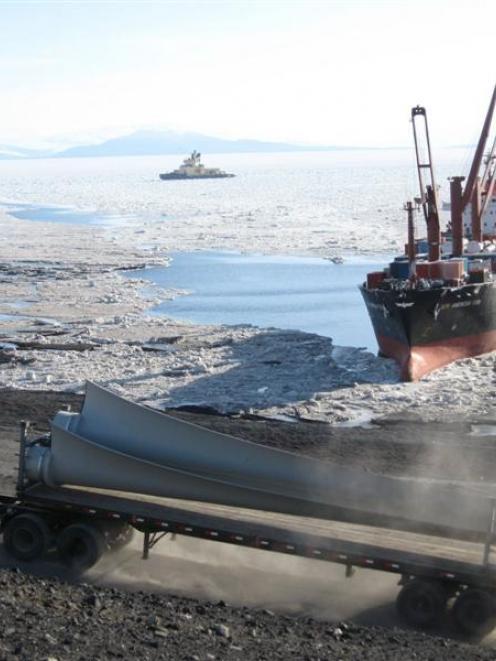 The $10 million wind farm is a joint venture between Meridian Energy Ltd and Antarctica New Zealand and will reduce reliance on diesel-generated electricity.

Meridian will fund, construct and own the wind farm and lease the project to Antarctica NZ over the project life.

Each of the three turbines will generate up to 333kW of electricity, reducing diesel consumption by about 463,000 litres a year, and will be linked to the electrical grids of both McMurdo Station (United States) and Scott Base (New Zealand).

Meridian Energy's Ross Island wind farm project manager Scott Bennett said the team had accomplished everything it set out to do over the past three months and had now returned to Christchurch.

"We have installed the specially-designed spider foundations for the three wind turbines at the Ross Island site, and installed and commissioned the power system between Scott Base and nearby McMurdo Station to which the turbines will be connected," he said.

Each spider turbine foundation consisted of eight 13-tonne pre-cast concrete foundation blocks arranged in a circle in a pit, backfilled and frozen in, so the top of the blocks were nearly flush with the ground.

The eight-legged steel spider was then bolted to the concrete blocks.

The wind turbine tower would attach to the top of the steel foundation to ensure the turbine could withstand tough conditions, including wind gusts up to 205kmh.

Even during the summer months, temperatures at the Ross Island site dipped below -20degC.

"We were well prepared, however, and the special techniques required to cope with the extreme cold worked very well," Mr Bennett said.

The new power grid was tested by running Scott Base for two days from McMurdo Station to check connections.

Staff were also trained to to operate the wind farm when it is commissioned early next year.

The wind turbine components, as well as all other equipment needed to install the turbines, have been shipped to Antarctic and stored on site for winter.

Construction would begin again in November, with completion of the project expected in February.